The construction of the subway is a major leading project in Luoyang City to enhance its comprehensive carrying capacity. For the general public, all the progress on subway construction is attractive. At the end of last year, Shijiawan Station of Metro Line 1 welcomed another important node. The first shield machine â€œMudan No. 1â€ in Luoyang City was officially launched. However, it is difficult for most people to have the opportunity to see the inside of the shield machine. A few days ago, the author followed the shield construction personnel of the City Rail Corporation and the Eleventh China National Bureau of Hydroelectricity, and walked into the â€œPeony No. 1â€ shield machine that was being excavated, and experienced a subway construction â€œhole in the worldâ€.

Hello everyone! My name is Peony No. 1 Shield Machine, which was specially built for the construction of the Luoyang Metro.

While unearthing while digging, squeezing reinforcements while assembling the segments is my masterpiece!

Many people in Luoyang are very concerned about what kind of things I do and how they work in the day as a "drilling artifact". I will introduce myself today. 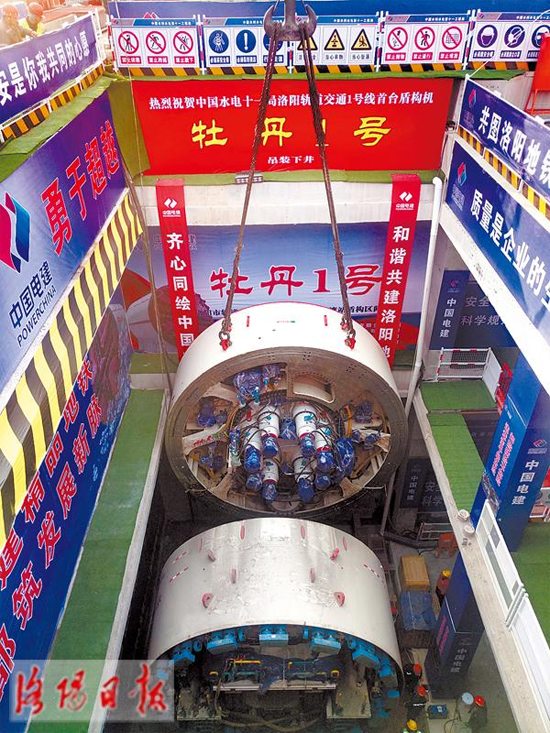 1. The â€œPeony No. 1â€ shield machine is designed for the quality of Luoyang

First introduce the "family" background of our shield machine.

Shield machine, full name is a full-surface tunnel boring machine. It is a kind of metal shell with a complete machine and auxiliary equipment in the shell. Under the cover of the shield, the excavation of the tunnel soil and the transportation and assembly of the earth slag, and the assembly of the segments, Grouting and other operations to build special tunnel construction equipment.

Luoyang is an old industrial base. The municipal party committee and the municipal government put forward the goal of â€œLuoyang Metro Luoyang Constructionâ€. As one of the earliest cities engaged in R&D and manufacturing of shield equipment, Luoyang's shield machine manufacturing has its foundation and advantages. 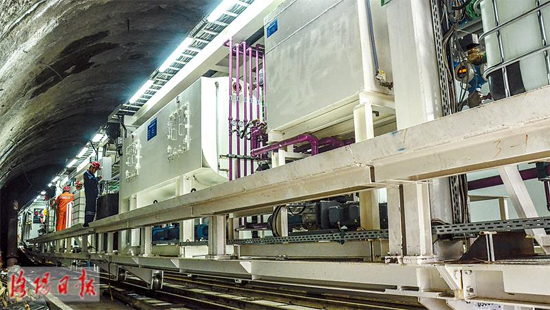 This is not a case in which CITIC Tiejian Heavy Industry Digging Equipment Co., Ltd., a joint venture established by CITIC Heavy Industry, China Railway Construction Heavy Industry Group Co., Ltd. and Luoyang Rail Transit Co., Ltd., is committed to the construction of Luoyang Metro on the one hand and will also be active on the other. To expand the tunneling equipment market in the Midwest and North China.

The modern shield machine integrates light, machine, electricity, liquid, sensing, and information technology, and can be tailored to the different geology.

I am the product specially designed for the tunneling of Luoyang Metro Line 1 by the company.

As the first shield machine at the first line of the Luoyang subway project, I formally went offline at the Yibin High-end Manufacturing Industrial Park of CITIC Heavy Industry in June last year. It was designed and manufactured according to the special hydrogeological conditions and stratigraphic structure of the Luoyang Metro Line No. 1. Composite earth pressure balance shield machine.

In the next step, my little brothers will come to report one by one, and together they will escort the construction of Luoyang Metro. 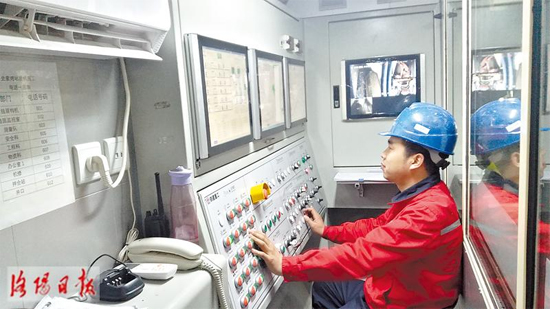 2. The â€œcabâ€ is the same as the one on the plane. The buttons are dense

Take everyone to see my body structure!

We usually have large round faces ranging from 6 to 15 meters in diameter. They are about 85 meters in length and have a total weight of more than 400 tons. It is a big thing.

Looking far away, I'm a bit like an open train.

From the beginning to the end, I consisted of more than 10 parts, such as cutter heads, shields, pipe assembly machines, screw machines, and trolleys. I am working from Shijiawan Station to Tawan Station. The excavation diameter is 6.2 meters. The total length is about 85 meters. The total weight is about 450 tons. The comprehensive performance has reached the domestic advanced level!

Among these components, the largest one is the number of trolleys. As an important part of the shield machine, the trolley car mainly serves as the logistical support. It is equipped with grouting systems, grease systems, sealed grease systems, hydraulic pump stations, hydraulic tank systems, electrical cabinets, air compressors, and transformers. Recirculating water systems, as well as related systems and supporting facilities for shield tunneling operations such as sewage treatment and belt conveyors.

A total of 6 trolleys were installed in my body. Each trolley was nearly 11 meters long. The six trolleys are the basis for my smooth running day to day.

Now take a look at my core location - the main control room, which is equivalent to the aircraft's "cab." There is a small space here. When two people enter at the same time, they can't turn around.

Through the photos, we can clearly see that there are dozens of buttons in the main control room to control all relevant equipment of the shield machine, as well as four LCD screens: one is responsible for the precise positioning of the shield machine, calibrated every 10 seconds. Once the shield machine deviates from the track, an alarm will be issued. The unit of measurement is accurate to millimeters. Two data monitors are responsible for all equipment. There is also one used to monitor and monitor real-time video. The entire shield machine is equipped with six monitoring devices. The tunneling parameters in the tunnel are transmitted to the main control room and ground monitoring room in real time through optical fiber. Any problems can be controlled and adjusted at any time.

Every day when I work, I need nearly 50 people to serve me. Among them, one for each of the â€œhelmsmanâ€ in the day shift and the night shift is â€œthe highest priorityâ€ among all personnel.

Here, we will give you a grand introduction to the driver of the shield machine. In general, a qualified shield machine driver is indispensable for theory and practice. After the theory passes, it must have been tempered for at least 4 years and it will not be considered as qualified until any accident occurs.

As the "legends of rivers and lakes," there are fewer people who will open shields than those who will fly airplanes. 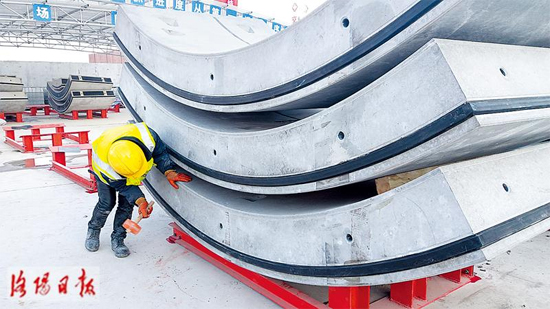 Metro shield construction has a "trilogy": First, the tunneling, the second is the assembly of the segments, and the third is the wasteland transport.

My working principle is somewhat similar to that of an electric shaver.

When driving in the ground, my face is always on the front, exposing a row of steel teeth, under the pressure of the cylinder, the cutter wheel continues to rotate, my teeth - the 40 blade on the cutter head made of high-strength material The hob and scraper began to rotate and advance.

Every time I advance a small "step," I must be extremely careful.

The large size of our shield machine and the precise and complex construction details are not what ordinary people can handle. The deviations of the upper, lower, left, and right shields from the central axis of the tunnel are measured in millimeters each time. A little carelessness will have a huge impact on the operation of the shield. Once the deviation exceeds 50 millimeters, the line will have to be changed. The previous activities are all white...

At the end of last year, I started from Shijiawan Station and headed to the Tawan Station on the west side. At normal speed, I could move about 15 meters a day. However, I can also adjust the speed of the cutterhead between 0 and 2.6 revolutions per minute via the frequency converter. If the subterranean soil is better, I can run 20 meters as soon as possible.

In this way, every day I greedily ate in the dirt and stones and left behind a long tunnel after I had eaten. This is the future subway passage. 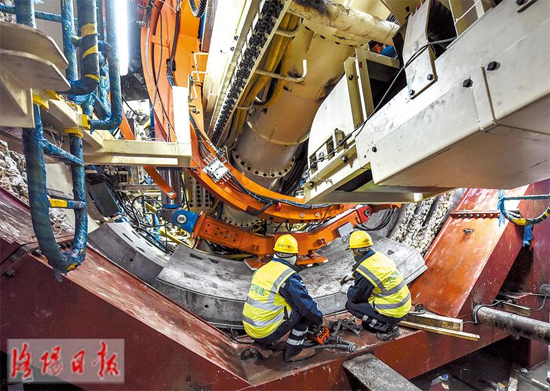 The magic of our shield machine lies not only in "shield" but, more importantly, in "construction."

While digging, I was able to complete the construction of the tunnel simultaneously. Imageically speaking, I am like a steel shovel, and where it passes, it will build a circular subway tunnel skeleton.

Here, we must rely on the piece assembly machine to show their talents.

First introduce the next piece. The segment is the main assembly component of the shield construction and is the innermost barrier of the tunnel.

The segments used in Luoyang Metro Line 1 are 1.5 meters wide, 35 centimeters thick and weigh 4.5 tons. They are all reinforced concrete structures and have a service life of up to 100 years. Even if a heavy truck is rolled up, the segments will not break.

The reason why the load-bearing requirements are so high is that the segments must support the earth at the top of the tunnel more than 15 meters thick, as well as the vehicles and buildings on the road surface.

In my long body, there are special ferry wagons.

After the slab is prefabricated on the ground, it is transported by the crane to a designated location on the underground and then transported to the segment assembly machine by ferry.

When I advance 1.5 meters, I must assemble a ring of prefabricated pieces in the tunnel simultaneously by the pipe piece assembly machine to form the "interior facade" of the tunnel.

Each ring segment consists of six blocks that can spell a circle that supports the soil and water around the tunnel to avoid landslides. In addition, in order to avoid surface subsidence, the gap between the outer wall of the segment and the inner wall of the tunnel will also be filled with mortar, so that a period of tunnelling will be completed.

Slag and soil transport: gantry crane lifts the dirt truck to the ground

I rushed forward in the underground of Luoyang, obscuring and sweating every day.

Although I am a "large stomach king", the total amount of soil and stones that I have eaten in my stomach is still limited. How is the residue removed?

Here, I introduce another important part of me - the Sinotrans System.

This is me, "drilling artifact" - "Peony 1" shield machine.

What I eat is soil, what I spit is still soil. It is an underground worker.

This year, with the advancement of the first phase of the Metro Line 1 and Line 2, our family will have more than a dozen brothers to come to Luoyang. We look forward to these brothers all show their talents and contribute more to the construction of Luoyang Metro! (Li Donghui, Yan Yansong, Ma Yan)